US equity markets completed the first full week of 2011 higher and marks the sixth consecutive week of gains by the major US markets. The Dow Jones Industrial Average (DJIA) gained 97 points (+0.84%) closing the week at 11,674.76. The S&P 500 closed on Friday at 1271.50 adding 14 points (+1.10%). Much is made about looking at the first week of the year as a predictor for the full year and I will share some of the data on this phenomenon below.

The top three broad economic sectors last week were Information Technology, Health Care, and Financials while Consumer Staples, Real Estate, and Materials were all negative for the week. On an absolute relative strength basis, Real Estate, Consumer Discretionary, and Information Technology are the three strongest sectors while Utilities, Health Care, and Financials are the weakest.

The MSCI (EAFE) World Index lost 0.83% for the week on renewed worries over the European debt markets. Developed markets in general posted greater losses than emerging markets maintaining an overall trend that has been in place for the past year. The Far East and Middle East were, in general, the best performing areas of the world while developed Europe and India were the worst performing.

The Euro closed at $1.2916 falling $0.045 (-3.4%) from $1.3369 putting the Euro at its lowest point against the US dollar in the past four months. Europe cannot shrug off the concerns over the on-going debt problems with attention focusing this week on Portugal and Spain.

Gold fell $51.20 (-3.6%) per ounce to close last week at $1368.50 on expectations that the US and global economies were strengthening and investors were less concerned about risk and uncertainty. Oil also fell 3.5% following on the same reasoning. Both of these (and other) commodities are volatile and will trade widely on small changes in perceptions of macroeconomic issues. The gaining technical strength of commodities in general, however, is a good reason to consider including commodities in your portfolios.

The 10-year treasury closed the week at 3.3256% up slightly from the year-end close of 3.2877%. Treasuries and fixed-income in general reflect the same macro trend as commodities as investors are selling bonds in favor of more risky investments following the consensus that equities will outperform bonds in 2011. The Barclays Aggregate Bond Index gained 0.02% for the week giving indicating that the bond market in general was flat last week.

Stock investors are always looking for "rules of thumb" or an "old wives tale" to help give them some indication of what the stock market might do going ahead. Last week I discussed the general consensus of the pundits and their predictions for 2011 and this week I will follow that up with a brief discussion of the January Effect. The January Effect has several versions, but I will focus on the one that says, "As the First Five Days of January Goes, So Goes January, and So Goes the Year." 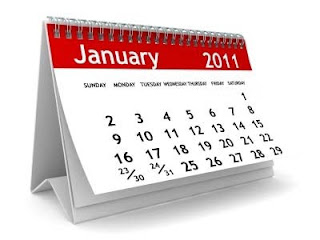 According to The Stock Trader's Almanac, the last 38 up "First Five Days" periods were followed by full-year gains 33 times, for an 86.84% accuracy ratio; and the average gain for these 38 years is just under +14%. Of the five years that didn't "work," four related to war, and one (1994) produced a flat year. The year 2002 was the last one that failed to be properly predictive, as January started the year up +1.1%, but ended nastily with a loss of -23.4%. For those first five days of January that start off in negative territory, which have been 23 in all, they have been followed with 12 up years and 11 down years. As a sidebar, the last two years have been winners, in that the first five days showed a gain, as did the entire year.

In pre-presidential election years (of which we are in now), this indicator has a stellar record. In the last 15 pre-presidential election years, twelve full years followed the direction of the "First Five Days." Realize that the January Barometer (the direction for the whole month), has an even better track record, with 14 of the last 15 full years having followed January's direction.

SHOULD YOU SELL YOUR BONDS?

Some of you may be wondering what is going on with US bonds. The real answer is not much. Bonds are not automatically going to go up every week, month, or year; however, they typically have less volatility (price fluctuations) than equities or commodities. Bonds are held in portfolios because investors desire a stream of income and to help dampen the effects of stock market moves. This past quarter we saw bonds, as measured by the Barclays Aggregate Bond Index, lose value (-1.4%) for the first time in eight quarters (Q3, 2008). So investors who have become accustomed to a steadily rising portfolio of bonds have seen their first setback since 2008.

In general terms, investors tend to move to bonds (or increase their allocations) when they are nervous about the stock market and want to protect their principal. This has clearly been in place for the past couple of years when inflows to bond funds has significantly outpaced stock funds. The Federal Reserve has helped this recent trend by keeping a lid on interest rates (buying bonds in the open markets) and pushing bond valuations higher (price of bonds moves inversely to interest rates). As I pointed out last week, investors are feeling more confident that stocks may outperform bonds in 2011, so bonds are being sold to raise cash to move into the stock markets pushing bonds down.

So to answer the question of selling your bonds, you must ask yourself why you own the bonds. If it was only for protection and you desire more stock-like returns, then you may want to consider moving a greater portion of your bonds into the stock market. If you are holding bonds to preserve your capital and use the interest from your bonds as income, then you probably do not want to make any changes at this time.

One final point. Not all bonds are alike. There are many different types of bonds of which risks will vary. So pay attention to the types of bonds you own.

The resurgence of debt fears in Europe is having an impact on global markets. This Wednesday the Portuguese government will offer between €750 million ($971 million) to €1.25 billion ($1.62 billion) of new bonds for sale. How the markets react to this auction will say a great deal about how serious investors perceive Portugal's problems to be. While the Portuguese are emphatic that they do not need aid, time will tell. The Euro remains under pressure for now which may negatively impact developed European stocks.

A reported leak in a pump station on the Alaska pipeline will cause supply disruptions of as much as 95% coming through the pipeline for an undetermined time. While individual oil companies may suffer, I would anticipate an increase in oil prices until repairs are made.

Mid and small capitalization stocks are preferred over large, growth is favored over value, US and International stocks are preferred over Commodities, Bonds, and Currencies. Commodities are showing growing strength and should be considered for portfolios. Bonds are holding their own, so if you own bonds for income or risk reduction, do not make adjustments to your portfolios at this time.