MARKET UPDATE AND COMMENTARY
May 31, 2014
May saw all the major stock indexes both here and abroad post positive gains.  Interest rates continued their steady decline, and many commodity prices fell as well.
For the month of May the Dow Jones Industrial Average (DJIA) gained 0.8%, the S&P 500 grew by 2.1%, the Russell 2000 added 0.7% (first monthly gain since February), and the NASDAQ rose 3.1%.  Year-to-date the major indexes look like this:  DJIA +0.8%, S&P 500 +4.1%, Russell 2000 -2.5%, and the NASDAQ +1.6%.
As I noted in my previous Update, the second revision of the 1st Quarter 2014 Gross Domestic Product (GDP) was expected to slip into negative territory and it did falling to -1.0%.  This is the first negative quarterly GDP number since the first quarter of 2011.  Markets, as expected, shrugged off this bad news and posted gains for the day.  While a contraction in the economy is obviously not good, remember that this number is now two months into the rear view mirror and much more current data is suggesting the 2nd Quarter GDP may rebound back into positive growth.
International markets followed US markets higher in May led by a 3.5% jump by the Emerging Markets region, a 3.3% gain in the Asia/Pacific region, a 1.9% improvement in the European-focused STOXX 600, and the broad Dow Jones Global ex-US index grew 1.6%.  For the year the DJ Global ex-US index is up 2.7%, the STOXX 600 is up 4.9%, the Emerging Markets region has gained 2.4%, the Asian/Pacific region is up 0.9%.
Within the Commodity sector Gold fell $45.90 (-3.8%) per ounce in May closing at $1246.00.  Despite the decline in May, Gold is still up $43.00 (+3.6%) for the year.  I have been reporting recently that food prices have been rising because of poor weather early in the year; however, Corn and Wheat fell significantly in price during May (-12.5% and -8.1% respectively) although both remain up for the year.  I believe it is too early to see if the lower prices will work their way into reduced prices for many of the foods we consume, but if this trend holds, I think it is possible to expect cheaper food prices down the road.
Interest rates continue to slide.  The yield on the 10-Year US Treasury fell 17 basis points (one basis point is equivalent to 0.01%) in May to close at 2.47% on Friday.  As yields have fallen, the Barclays US Aggregate Bond index has moved up in value adding 1.2% in May and 4.1% for the year.  A couple of years ago I read an article in the Wall Street Journal that opined that of all major economic indicators, interest rates were the hardest to predict.  So hard in fact that not only did the vast majority of economists incorrectly forecast the size of the change in interest rates, they could not even predict the direction of change!  2014 is proving to be no different.  Most economists thought rates were clearly headed up with the expected start of tapering (reduction in bond purchases by the Federal Reserve and ultimately ending the program).  The Fed has started tapering just as anticipated; however, rates have not followed expectations and have fallen.  I believe this has happened because real growth in the US economy continues to stagnate.  I would like to see rates rise slowly and steadily because that would signal a growing economy beyond the low to mid 2% growth rate we have experienced for so many years now.
A FOLLOW-UP TO MY COMMENTS ON INFLATION EARLIER THIS MONTH

Two of my favorite economists are Brian Wesbury of First Trust Advisors and Scott Grannis who writes the Calafia Beach Pundit.  They are my favorites because, in my opinion, they get it right much more often than they get it wrong.  They also look dispassionately at the economy unlike some economists who might be influenced by politics or other external, non-economic factors.  Because they are so good, I frequently share their thoughts with you to help you understand what is going on and this week is no exception.
Both Wesbury and Grannis have been bullish on the economy and markets for the past five years.  They have said, and are currently saying that the markets are not on the verge of another recession or collapse even though other media outlets and economists have been calling for just such a pullback.  Their points of view in the recent past and today are further substantiated by the market data I receive from DorseyWright & Associates.  The US Stock major asset category remains firmly in control and has shown no weakness or signs of breaking down.  This does not mean there will not be ups and downs along the way—a straight upward stock market does not exist; however, it does appear to me that factors that could contribute to a rising market are emerging.  With this background in place, I found their most recent comments very interesting.
While each said it differently, their conclusions were roughly the same: the US stock market is not overvalued and there are early signs that the supply of money in the economy could be increasing.  This in turn will help push asset prices (including stocks, real estate, and commodities) higher.  They also feel that over the short-term inflation will remain in check; however, as the supply of money increases in the economy, the risk for inflation will grow with it.  In short, we may be at the beginning of another upward movement in the stock market, which for the first time in recent market history, could be helped by more money coming into the markets—the proverbial “sugar high” some commentators have said already exists.  This is good news for now, but both gentlemen caution the Fed will have a difficult task to keep the economy expanding while holding the inevitable rise in interest rates to a reasonable pace.  If the Fed gets it wrong and asset values get far ahead of themselves, we could see another nasty correction at some point in the future.  It is far too early to know if the Fed will be up to the challenge.
I will conclude this section by sharing with you a couple of the key indicators that I will be watching as we continue on this journey.  First, I will watch how the Money Market Fund category ranks overall in the DorseyWright list of fund categories.  Currently the Money Market Fund category sits at 130 out of 134.  Should the ranking rise, it is an early sign of a weakening of most asset classes.  Second, I will be watching the US Dollar index.  The US Dollar index compares the US Dollar to a basket of six foreign currencies with the Euro (58%) and the Japanese Yen (14%) the largest holdings followed by the British Pound, Canadian Dollar, Swedish Krona, and the Swiss Franc.  A weakening US Dollar could be an indicator that more US Dollars are flowing into markets and anytime you have more of something (supply), supply and demand basics tell you that all things being equal, the price of that asset will fall.  Finally, I will be watching the Price/Earnings (P/E) ratio of the S&P 500.  In simple terms, the P/E ratio represents how much an investor is willing to pay for $1 of earnings.  In the past, when P/E ratios have moved significantly above their averages it has often been a warning sign that too many dollars were chasing stocks and pushing prices up beyond the true value of a stock/company.  According to Bloomberg, the current P/E ratio is 17.6 compared to the 55-year average of 16.6.  The current P/E ratio is slightly elevated, but not in any meaningful or harmful way.
LOOKING AHEAD
I continue to believe that the economy (1st quarter not withstanding) will continue to plod along.  There are early signs that some of the excess US Dollars sitting in bank reserves may be finding their way into the economy increasing the risk for asset price inflation.  For asset investors I believe this will initially be a positive but again increases the risk of a meaningful asset price correction some time in the future. 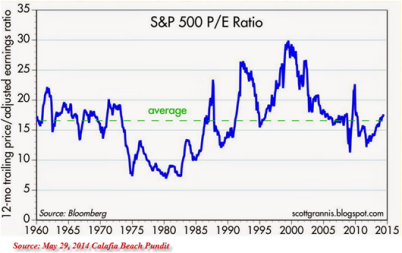 I am maintaining my broad guidance.  I favor US stocks overall of the six major asset classes I follow.  Within US stocks I prefer small and middle capitalization companies over large cap.  Looking at the major economic sectors, the Materials and Financials sectors are now favored.  I should point out that from a pure performance perspective (as compared to relative strength which is slower to move) Real Estate, Utilities, and Energy continue to be the best performing sectors while Consumer Discretionary the weakest.
The International stock asset class still ranks number two of the six major asset classes.  I am liking this category more as international stocks are sharing in growth along with US stocks, and I am beginning to add positions again to the international asset class.  I am pulling back from my outright ban on the Emerging Markets region and will be looking to selectively add to this category as well.
Bonds have shown some life with the pullback in interest rates.  I continue to like the High Yield bond sector, however, I am going to begin trimming my Floating Rate positions and increasing my exposure to the Multi-Sector bond sector.
Gold has taken a bruising lately and I have not been favoring this commodity sector for sometime and I still do not.  The Energy sector is my favored Commodity asset class investment area. 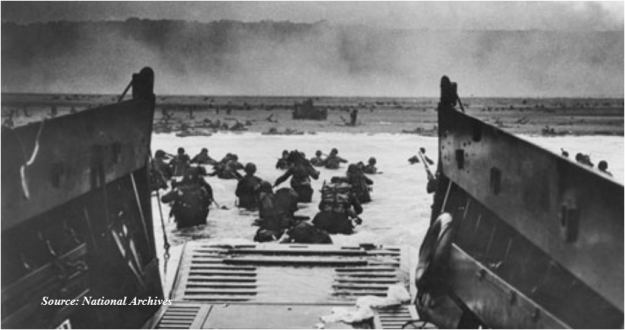